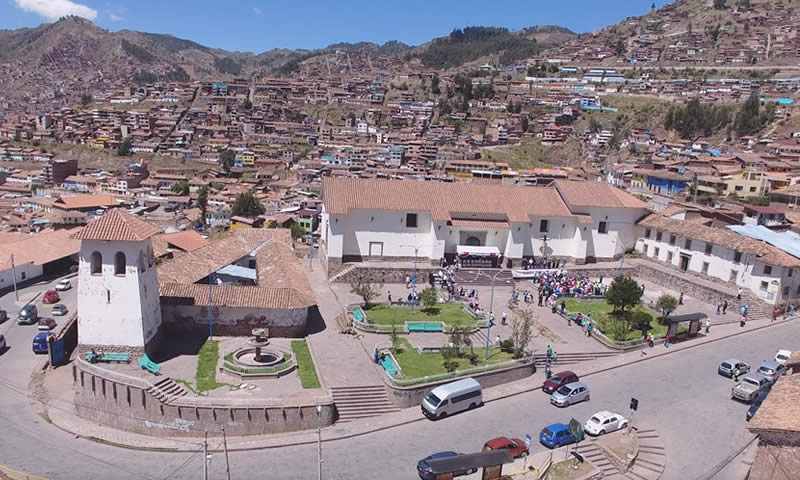 In the Inca times the neighborhood was called Carmenca and was on the road that led to one of the two most populous quarters of the Empire, the great Chinchaysuyoto the northwest. Besides ayllus (communities) dedicated to farming, as seen in the terracing still visible in the neighborhood, Carmenca housed the Cañari and Chachapoyas people from Ecuador and Northern Peru, respectively, who were the personal guards of the Incas.

When the Spanish came to Cuzco they came on that long highway from the north and entered Cuzco through Carmenca. Important Spaniards, such as the chronicler Juan de Betanzos, settled here. Even though the infrastructure of the neighborhood, its plaza, streets, and homes are being updated, in many parts of the neighborhood you can still see the colonial big-houses.

The Spanish built an archway as an entrance to the walled city of Cuzco that they built on top of the Inca one. In its day, it was a point of control for all people entering the city. Today the colonial arch still exists and brings an unusual charm to the neighborhood.

On its festive days both tourists and local people fill the neighborhood with joy and emotion. The carguyoq (those responsible for sponsoring the feast) and their supporters present dances, allegories (floats) and fireworks.

Santa Ana is about 20 minutes walking distance from plaza de armas it is a steep walk with stairs up a hill until you reach the church. But the view on top is absolutey amazing and breathtaking. Many hotels such as the Hilton and a lot of hostels are located here due to the amazing view. It is nice to take a walk in the neighborhood you will find many little stores here and it is just a little adoreable spot, which holds a lot of history within. I just sat down for a while and watched the people and enjoyed the view. In the area between the arch and the plaza of Santa Ana you see a diversity of businesses such as travel agencies, restaurants, grocery stores, hostels, and many others.