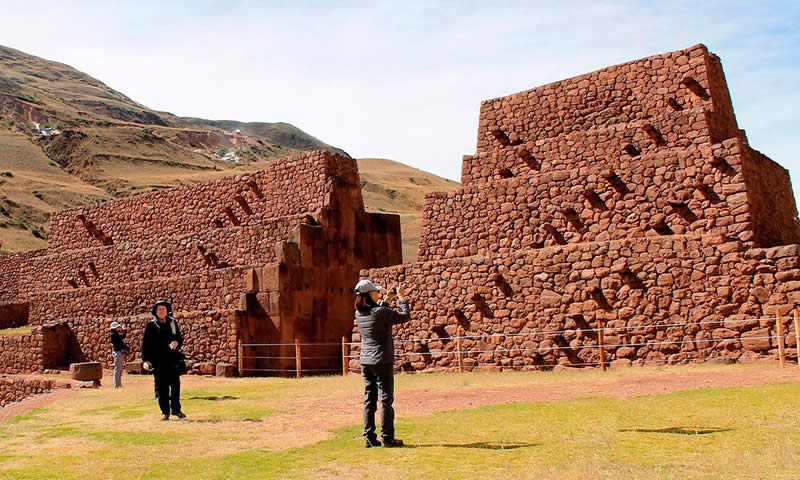 Pikillaqta (Quechua piki flea, llaqta a place , “flea place”), also spelled Piki Llacta, Pikillacta, Piquillacta, Piquillaqta is a large Wari culture archaeological site  20 kilometres (12 mi) east of Cusco in the Quispicanchi Province. Pikillaqta is a village from the Wari people. Wari was the main village, which influenced other cities like Pikillaqta for example. The site was occupied from about 550 to 1100 AD. The site was mainly used for ceremonical purposes and it wasn’t complete, when it was abandoned.

The Pikillaqta site is located in low ridges in the eastern Valley of Cuzco. The area has a lot of mountains, but no rivers only small lakes close to the city.  The landscape in the  area is grassy and  rocky, and sandy at places, where houses where built. Pikillaqta is 3,250 meters above sea level and in the Lucre Basin. The climate in the area of Pikillaqta is cold and dry. From mid April till October it is dry season. In November the rain season starts and the clime gets milder. The average temperature high is in the 60’s and the average temperature low is in the 30’s and 40’s year round in the Valley of Cusco.

Corn was an important crop and served as a major food source for the citizens of Pikillaqta. Corn was very special to the Wari, it was painted on pottery along with gods. Pikillaqta  controlled the area through agriculture with canals, reservoirs, aqueducts, terraces and cultivated fields. With the water, which was mainly brought through the rain the Wari people were able to build and maintain a hydraulic network. From August to December there was barely any rain, because it was the dry season, during this time they used an artificial irrigation system. Harvest season is from May to June, during that time they use the artificial irrigation system if needed. The canals they built were connected to the Lucre River and the Chelke stream. In total the canals system is about 48 thousand meters.

In Pikillaqta around 50,00 bones were found, most of them were from camels and guinea pigs. So this were probably the animals that have been eaten by the citizen of Pikillaqta.To kill the animals they probably used  projectile points, since those were also found there.

Scientists assume that Pikillaqta may have served as a large  ceremonial and feasting site. In the middle of the site, there was a large patio, which probably served as the center of administrative rituals and activities the Wari people did. The Wari people drank a lot of chicha, which was their native beer. Corn and chicha were very sacred to the Wari, and played a big role during ceremonies.

The halls of the Wari were robbed, but they held probably sacred and objects and offerings back then. In Wari art, ceremonies were depicted with a ceremonial pole coming out of the center of niched halls along with offerings, plants, and felines shown in a sacred context. The functions of the niched halls then were probably ceremonially and ritually used, because the halls match up with other Wari sites and art.

A small number of people could gather in one of the 501 structures of those buildings, for ceremonial practices on a more private scale. Sector four of the small conjoint buildings could have been a place where mummies were held and visited. Small fire pits were found in them, this could be a sign that there were offerings to the deceased done. For the Wari it was an important act to visit the mummies, since they believed that they watch over the living.

The Wari used their pottery and stones such as gemstones and minerals for trades. Okros and Wamanga style pottery were two of the main styles, which were made around the area. Pikillaqta was one of the biggest Wari sites so other goods were probably traded in and out of the area and housed in the many buildings at Pikillaqta. Many people came around for the ceremonies so a lot of items were probably traded or brought in with them.

There were two stages in the abandonment: the part where the Wari left and then a giant fire after that. After the fire, thiefs  came through the site and stole the valueables that survived the fire. Those are the only known people to be active on the site before archaeologists investigated.

Pikillaqta is open for visitors and tourists to view the ruins of the once large city. Pikillaqta was occupied from about 550 to 1100 AD and around 1100 AD is when it was ultimately abandoned. The reason for this is unclear, scientists assume that there was a crisis in the empire of the Wari and they were trying to expand their empire somewhere else and planned on coming back later. Pikillaqta was abandonded before much of the architecture was complete. The sealing of a number of key doorways occurred so unwanted visitors would have trouble entering some structures.