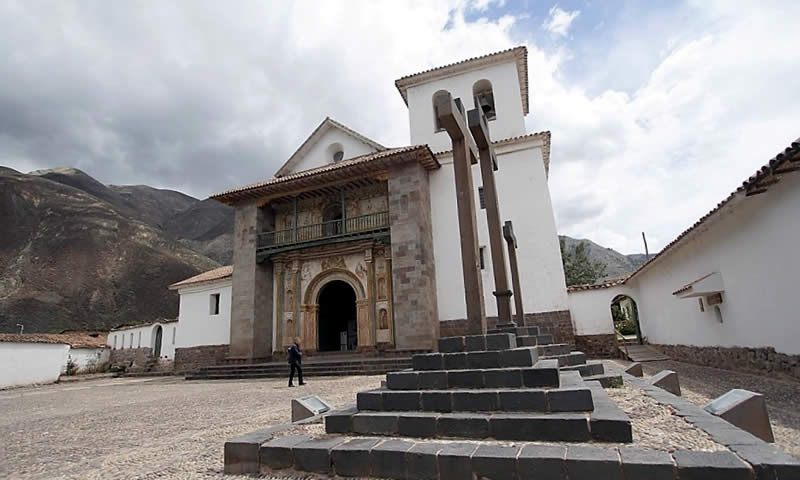 Andahuaylillas is a small town in the Southern Sierra of Peru located 25 miles (41 kilometers) from the city of Cusco, at 10,000 feet (3,100 meters) above sea level. Andahuaylillas 6,000 inhabitants are mainly involved in agriculture and cattle-raising, although in the past few years the town has seen an increase in tourism and the migration of its young to larger cities looking for job opportunities. The function of San Pedro Apóstol is mainly religious, although the community also supports social programs and economic development initiatives.

San Pedro of Andahuaylillas church is the major attraction for visitors. Even though on first sight the church seems inconspicious, due to it’s simple design. The quality and collection of art pieces is what makes it so special and worth seeing.

San Pedro Apóstol was built by Jesuits in the sixteenth century over a pre-Columbian huaca, or ceremonial space. The construction of the current temple started in 1570 with the creation of a small chapel corresponding to the existing apse and sanctuary; the nave and façade were completed in 1606. Much of the interior was decorated by Luis de Riaño, a student of Angelino Medoro, in the 1620s. It is often called the “Sistine Chapel of the Andes” because of the beauty of its mural painting. The sanctuary has a polychrome ceiling in the Mudéjar style built using a pre-Hispanic construction method called kur-kur which combines cane, straw and mud instead of wood.

Although its architecture is quite simple, the internal decoration is the most impressive part of the place. For example you will find the painting “Virgen de la Asuncion”, from the historical painter Esteban Murillo in this chapel.

You will also find murals made by Luis Riaño (17th century) that represent the man choosen by glory. He also did the design and painting  to decorate the socles and a remarkable oil painting of archangel San Miguel. The church also is in possess of a never seen collection of Cusquenian school paintings that represent the life of Saint Pedro. They are kept in amazing frames made of gold leaf, a majestic organ, silver jewelry and a baroque altar. In the enclosure, we can see rooms where there are remains of an Inca construction. Outside, on the west of the front patio, there are three carved crosses that represent the trinity as Catholic symbol (Father, son and holy spirit).

The main square is surrounded by leafy pisonay trees and palm trees. It is considered to be one of the most beautiful squares of the region. Huaro the city, where the ancient Inca wizards lived is only a few kilomteres from here. There is a wonderful temple with murals by Tadeo Escalante, one of the last masters of Cusquenian school.