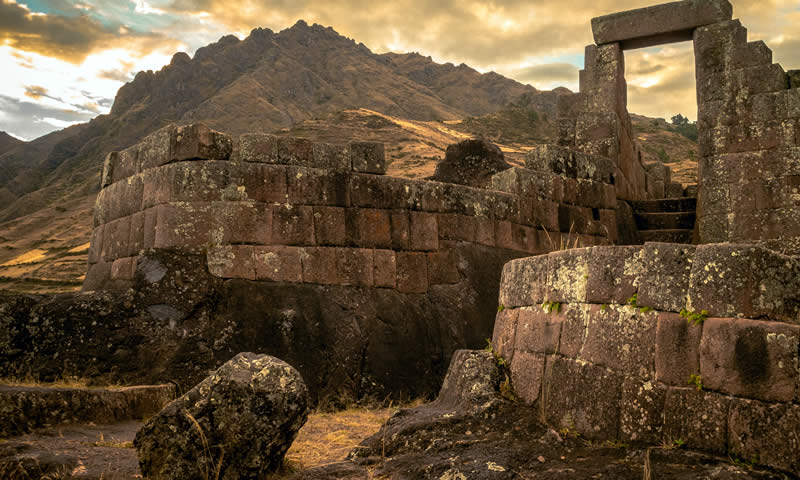 The Pisac ruins, located next to the modern town with the same name hold the remains of an impressive ancient Inca settlement. It is only about an hour drive from Cusco to Pisac, many people from Cusco go there, because it is warmer there.

There is not much information about the history of the ruins, but Pisac was probably used as a ceremonial and military centre. After the conquest of the Spanish in the 1530s the site was abandoned.

Travelling through the Urubamba Valley, starting in the town of Pisac, enables tourists to visit an archaeological area in the highest mountain areas. Already the drive from Cusco to Pisac through the beautiful Sacred Valley is just breathtaking and simply amazing. The tour will start in the town of Pisac, where visitors get a demonstration of the local jewelry manufacture. After the demonstration visitors will get  some free time to explore the little cute city of Pisac and have the possibility to shop for some souvenirs.

Afterwards the tour continues to the ruins of Pisac, here you can find a variety of buildings, plazas, temples, pools and other structures, all built between the 10th and 11th centuries.

The architecture of the Incas is just stunning and unbelieveable,the techniques they used to build enormous walls, palaces and turrets with stone blocks, all done without any type of cement or adhesive. Those buildings survived every earthquake and even the Spanish weren’t able to destroy them while conquering the country. Until today those masterpieces are much- admired.
Today the ruins of Pisac sit above a looming hilltop above the modern town and represent the best examples of Inca ruins in existence. Alongside the vast and impressive agricultural terraces surrounding the hillside, the platform built at the top contains the remains of a fortress and temple complex. Among the structures which can be seen here are the ruins of the Temple of the Sun, ceremonial baths, altars and fortified walls.

The Intihuatana solar observatory receives the greatest admiration. Fine quality stone carved into the shape of many hands forming a semi-circle.

To manage their water supply, the Incas carried out engineering works creating many channels that travel the length of the terraces, and, despite the height of construction, they even included decorative fountains.Water was very important for the Incas, because it is the source of life.  The terraces they build, were to grow different vegetables and fruits at different temepratures and altitudes.

Pisac is one of the few archaeological zones with two open tunnels cut into the hills, one which heads north for 15 meters (49 feet) and another 3 meter (10 feet) tunnel that leads to the summit.

It is definitely worth seeing and a very special place with a lot of history and energy I would go again anytime.