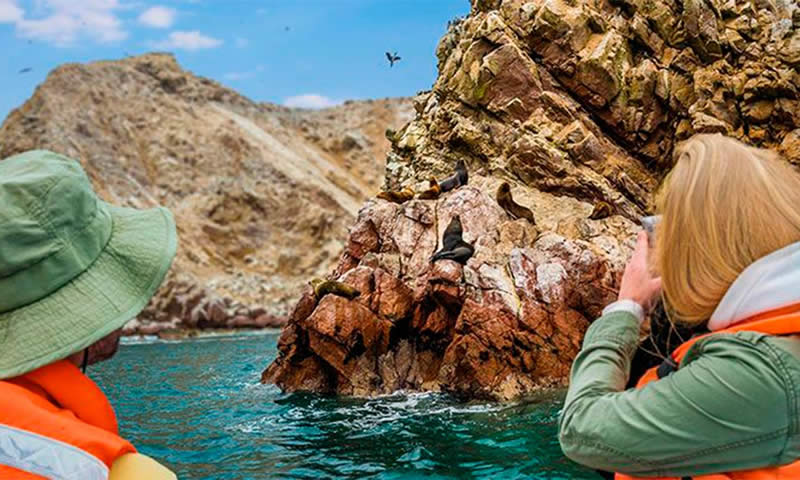 The Ballestas Islands are a group of small islands close to the town Paracas located within the Paracas District of the Pisco Province in the Ica Region, on the south coast of Peru. The islands persist out of large rock formations and cover an area of about of 0.12 km². Those islands provide a home for animals such as the blue-fotted booby, the tendril, Humboldt penguins and two varieties of of seals ( fur seals and sea lions).

On the way to the islands, on the Paracas Peninsula, visitors will notice El Candelabro, a large-scale geoglyph that may have served as a beacon to mariners. The mystery as to the origins of this particular geoglyph is ongoing with much speculation. The visit to the Ballestas Islands is, from an ecotourism point of view, probably the best known along the Peruvian coast.

Although the island is nicknamed the ‘poor man’s Galapagos,’ the Islas Ballestas will be a memorable visit. The only way to get there is with a boat tour, offered by many travel agencies. None of the small boats have a cabin, which is why dressing up warm and weatherproof is a must. The sea can get rough, if you have problems with motion sickness you should take pills before.

Also you should wear a hat (cheap ones are sold at the harbor), as it’s not unusual to receive a direct hit of guano (droppings) from the seabirds. On the  boat journey, which takes about 1½ hours, you can’t miss the famous three-pronged Candelabra geoglyph, a giant figure etched into the sandy hills, which is over 150m high and 50m wide. No one knows exactly who made the geoglyph, or when, or what it signifies, but theories abound. Some connect it to the Nazca Lines, while others propound that it served as a navigational guide for ancient sailors and was based on the constellation of the Southern Cross. Some even believe it to have been inspired by a local cactus species with hallucinogenic properties.

An hour is spent cruising around the islands’ arches and caves, watching large herds of noisy sea lions sprawl on the rocks. The most common guano-producing birds in this area are the guanay cormorant, the Peruvian booby and the Peruvian pelican, seen in colonies of several thousand strong. You’ll also see pelicans, cormorants, Humboldt penguins and, if your lucky even dolphins.

Although you can get close enough to the wildlife for a good look, some species, especially the penguins, are more visible with binoculars. On your return trip, ask to see the Chilean flamingos, which are usually found in the southern part of the bay and not on the direct boat route. The flamingos aren’t always there. The best time to see them is from  June to August. Back on shore, a minibus takes tour groups back to Pisco  just in time for lunch. Another option is to continue your tour to  the Reserva Nacional de Paracas.