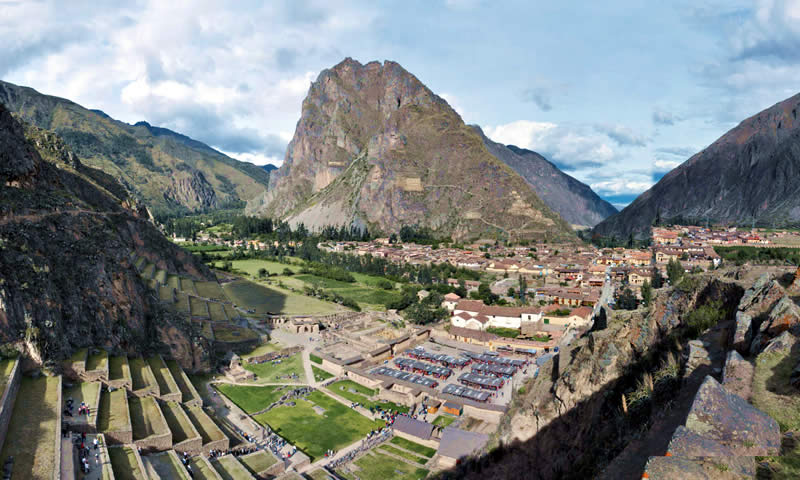 Ollantaytambo (called by locals Ollanta) is a town in the Sacred Valley of the Incas near Cusco in the Southern Sierra region of Peru. This is where the Incas retreated after the Spanish took Cusco. Much of the town is laid out in the same way as it was in Inca times. The huge, steep terraces that guard Ollantaytambo’s spectacular Inca ruins mark one of the few places where the Spanish conquistadors lost a major battle.

The rebellious Manco Inca had retreated to this fortress after his defeat at Sacsaywamán. In 1536, Hernando Pizarro, Francisco’s younger half-brother, led a force of 70 cavalrymen to Ollantaytambo, supported by large numbers of indigenous and Spanish foot soldiers, in an attempt to capture Manco Inca. The conquistadors, fought with arrows, spears and boulders from atop of the steep terracing, so the Spanish were unable to climb the fortress. In a brilliant move, Manco Inca flooded the area below the fortress with the help of previously prepared channels. With Spaniards’ horses bogged down in the water, Pizarro ordered a hasty retreat, chased down by thousands of Manco Inca’s victorious soldiers. Yet the Inca victory would be short lived. Spanish forces soon returned with a quadrupled cavalry force and Manco fled to his jungle stronghold in Vilcabamba.

Ollantaytambo was a highly effective fortress, it also served as a temple. A finely worked ceremonial center is at the top of the terracing. Some extremely well-built walls were under construction at the time of the conquest and have never been completed. The stone was quarried from the mountainside 6km away, high above the opposite bank of the Río Urubamba. Transporting the huge stone blocks to the site was a stupendous feat. The Incas’ crafty technique to move massive blocks across the river meant carting the blocks to the riverside then diverting the entire river channel around them.

The 6km hike to the Inca quarry on the opposite side of the river is a good walk from Ollantaytambo. The trail starts from the Inca bridge by the entrance to the village. It takes a few hours to reach the site, passing several abandoned blocks known as piedras cansadas – tired stones. Looking back towards Ollantaytambo, you can see the enigmatic optical illusion of a pyramid in the fields and walls in front of the fortress. A few scholars believe this marks the legendary place where the original Incas first emerged from the earth.

If you are interested in the Inca culture and history Ollantaytambo is definitely a place you should visit during your stay in Peru. This place holds a lot of history and stories about the Inca times. The climb up is demanding but do able for all ages, just take it one step at a time and include little breaks on the terraces and you will be fine.

Choquequirao – the sister of Machu Picchu