Choquequirao – the sister of Machu Picchu 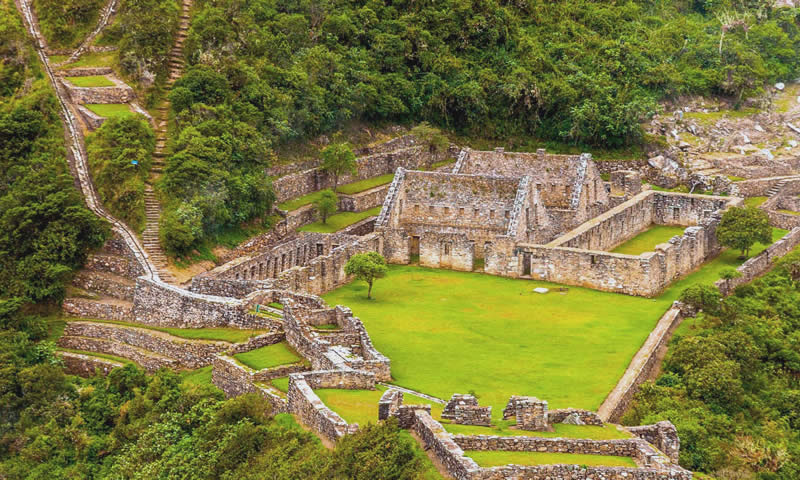 Choquequirao (Aymara chuqui, Gold, and Quechua k´iraw, Cot, ie Cradle of Gold), also known as the sister of Machu Picchu is one of the most remote Inca ruins in the Peruvian Andes. It is located between the foothills of the Salcantay Snowy, in the province of Anta, Cusco region, southern Peru.

The extraordinary location of Choquequirao  is due to a range from snowy hight over 6,000 meters, to tropical valleys just over 1.800 meters considered as one of the most extraordinary journeys depending on altitude and varied ecosystems. Moreover, it preserves an important water reservoir in the Qoriwayrachina, Sacsarayoc, Abuela and snowy Padreyoc, and on the western slope of Mount Salkantay. 16 species of birds, 93 of plants and animals such as the condor and the andean bear, call Choquequirao their home.

The archaeological remains of Choquequirao are comprised of buildings and terraces on different levels, from the lowest level to the top Sunch’u Pata, which was leveled and fenced with stones to form a platform with an approximate area of 150 square metres.

It is possible thatChoquequirao is one of the lost citadels in the valley of Vilcabamba, where the Incas took refuge in 1536.

As you can see the citadel resisted the passage of centuries, thanks to the lush and wild vegetation and the rocks, which have camouflaged and still cover about 80% of its surface. Even though its discovery is not recent, in the last few years it has aroused the interest of the Peruvian government.  They plan to recover the archeological complex and make it even more accessible for tourists who are interested in learning about the Inca culture alternative.

The starting point to Choquequirao is from  Cusco to Abancay. From Cachora, the last city before the arachaelogical city the adventure starts. The hike is about 30 km and can be done in two days.
From Cachora it is necessary to go down to camp at the Apurimac River (1.530 m). On the second day the hike goes up to 3.085 meters where Choquequirao is located.
In the coming years the government is planning on building a cable car to the archaeological complex of Choquequirao. The cable car will be build between Apurimac and Cusco making the access to the Inca city in just over three hours starting from Cusco.

Choquequirao was more than a fortress, it was a religious site. The hidden location of Choquequirao indicates that it probably has been the most important religious center, inhabited by priests and those consecrated by the gods. Paintings and cemeteries were found that would confirm this theory.

Choquequirao is arranged in nine areas and small villages built around a large square where all the roads from each area end. It was possible to locate the upper plaza (Hanan), the deposits (Qolqa), the main square (Huaqaypata), the lower square (Hurin) the agricultural platforms immediate to the main square (Chaqra Anden), the ceremonial platform (Ushno) and housing for the priests in the bottom of the hill.

Other theories are inclined to consider that Choquequirao was a political and economic center, which served as a commercial and cultural center, between the coast, highlands and jungle. Surprisingly Choquequirao has multiple two floors buildings with cooking facilities inside. They have found 22 figures known as Llamas del Sol carved in stones, arranged in 15 terraces facing the snowy Qory Hauyrachina. Choquequirao has a great system of terraces / balconies, a feature of the Inca villages. They were built on the hillsides for agricultural use.

According to the legend, Choquequirao corresponds to the lost city and would have been the place inhabited by the last Incas who escaped from the capital of his empire, Cusco, after the defeat of Manco II. In this place the Incas had found refuge and managed to resist the Spanish invasion for forty years. Choquequirao was so extensive that had contained fifteen thousand inhabitants.

The true story of Choquequirao is lost in the depths of centuries. Another therory applies that it was a border fortress defending probably the upper valley of Apurimac, one of the natural access routes to Cusco, built aganst the surprise attacks of the powerful enemy nation of the Chanca, who sought the Inca capital at the time Viracocha. From an undeniable Inca origin, the stories say that it was built by the Inca Viracocha, by his son Pachacutec, or his grandson Tupac Inca Yupanqui.

The road from Choquequirao to Machu Picchu is one of the alternative paths to the traditional Inca Trail to reach the majestic Inca citadel. This is the longest hike but also the least travelled, to do this hike it is necessary to join a guided tour with an experienced guide who is familiar with the area. Living the Choquequirao – Machu Picchu trek is amazing. Travelers walk from the most imposing heights to deep ravines, crossing rivers over bridges made from tree trunks and enjoying the experience of the different climates of the Peruvian jungle. The journey begins in Cusco, where the tour operator picks up the passengers from their hotels to go to the village of Cachora. There the porters are waiting to begin the trek downhill by the Apurimac canyon to reach Chiquisca (1.800 m.a.s.l.) where the first camp is made. The next morning  the walk starts towards Choquequirao, where we will visit the archaeological site and see condors flying across the mountains ranges.

During the following days other archaeological sites in the region such as Pinchiunuyoj will be visited where  different bird species and the coca and orchid plantations can be seen. We continue to the Cornfield, which is located at 3.000 meter, this is where we will camp. In the following days, we will continue touring and visiting  different Inca constructions. The peak height we will reach is at  4.670 meters above the sea level.From here we will have a spectacular view of the area and the two snowy mountains Sacsarayoj and Padreyoj can be seen. From here we continue to Rio Santa Teresa and hike until we will take a shuttle to the district of Santa Teresa where you can enjoy the Hot Springs. The last day we will only hike for about 3 hours and end up at a altitude of 2,810 meters. From here you can enjoy a fantastic view of the city of Machu Picchu. From here we will take a train to Aguas Calientes (Machu Picchu Pueblo). Once arrived in the town it is up to the traveller how they spend their evening. The next morning we will visit the Citadel of Machu Picchu.