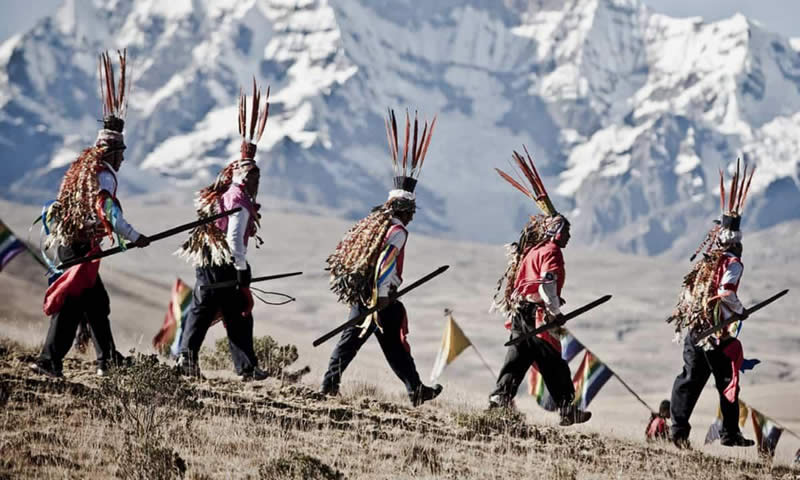 Qoyllority is a Quechua word meaning «snow star» or «brilliant snow» it is a religious festival held annually at the Sinakara Valley in the southern highlands Cusco Region of Peru.This old religious procession is only practiced by the inhabitants of the Grandes Andes. every year, a few days before the celebration of the Corpus Christi, every small village or clan send a delegation of colorful dancers and «pabluchas» to the Chapel of the Lord Qoylloriti. Local indigenous people of the Andes know this festival as a native celebration of the stars. In particular they celebrate the reappearance of the Pleiades constellation, known in Quechua as Qullqa, or «storehouse,» and associated with the upcoming harvest and New Year. The Pleiades disappears from view in April and reappears in June. The new year is marked by indigenous people of the Southern Hemisphere on the Winter Solstice in June, and it is also a Catholic festival. The people have celebrated this period of time for hundreds if not thousands of years. The pilgrimage and associated festival was inscribed in 2011 on the UNESCO Intangible Cultural Heritage Lists.

According to the Catholic Church, the festival is in honor of the Lord of Quyllurit’i (Quechua: Taytacha Quyllurit’i, Spanish: Señor de Quyllurit’i) and it originated in the late 18th century. The young native herder Mariano Mayta befriended a mestizo boy named Manuel on the mountain Qullqipunku. Thanks to Manuel, Mariano’s herd prospered, so his father sent him to Cusco to buy a new shirt for Manuel. Mariano could not find anything similar, because that kind of cloth was sold only to the archbishop. Learning of this, the bishop of Cusco sent a party to investigate. When they tried to capture Manuel, he was transformed into a bush with an image of Christ crucified hanging from it. Thinking the archbishop’s party had harmed his friend, Mariano died on the spot. He was buried under a rock, which became a place of pilgrimage known as the Lord of Quyllurit’i, or «Lord of Star (Brilliant) Snow.» An image of Christ was painted on this boulder.

The Quyllurit’i festival attracts thousands of indigenous peasants from the surrounding regions, made up of Paucartambo groups (Quechua speakers) from the agricultural regions to the northwest of the shrine, and Quispicanchis (Aymara speakers) from the pastoral (herders) regions to the southeast. Both moieties make an annual pilgrimage to the feast, bringing large troupes of dancers and musicians. There are four groups of participants with particular roles: ch’unchu, qulla, ukuku, and machula. Attendees increasingly have included middle-class Peruvians and foreign tourists.

The festival takes place in late May or early June, to coincide with the full moon. It falls one week before the Christian feast of Corpus Christi. Events include several processions of holy icons and dances in and around the shrine of the Lord of Quyllurit’i. The culminating event for the indigenous non-Christian population takes place after the reappearance of Qullqa in the night sky; it is the rising of the sun after the full moon. Tens of thousands of people kneel to greet the first rays of light as the sun rises above the horizon. The main event for the Church is carried out by ukukus, who climb glaciers over Qullqipunku and bring back crosses and blocks of ice to place along the road to the shrine. These are believed to be medicinal with healing qualities.Señor de Qoyllority