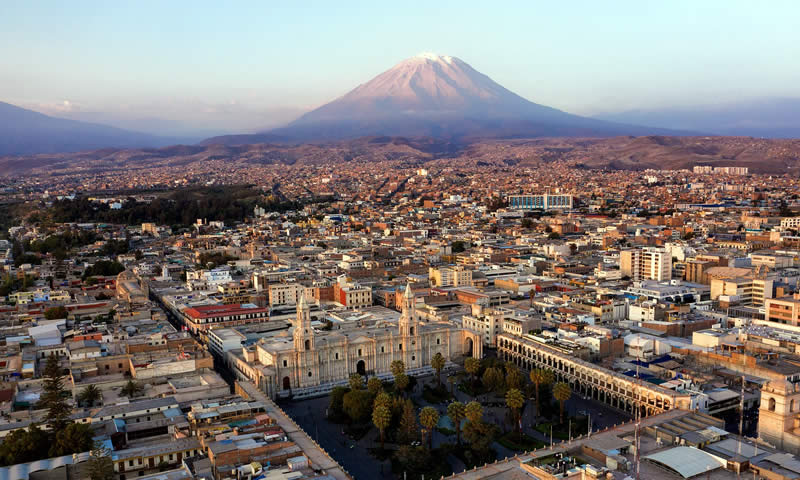 Arequipa is a city in the Southern Coastal region of Peru just below the edge of the Altiplano, at 2380 meters above sea level and surrounded by three impressive volcanoes.

It is Peru’s second most important city ,after Lima and the second most popular among tourists, after Cuzco.

The city is part of the so called «Southern Peru Tourist Corridor», together with Nazca, Puno and Cusco.

In contrast to these other cities, Arequipa is an example of the Spanish and mestizo culture developed in Peru. There are no Inca artifacts or ruins in the city.

In the winter it is warmer than in the summer. It is nicknamed the ‘white city’ (la ciudad blanca, in Spanish), because many of the buildings in the area are built of sillar, a white stone. This rock was quarried from the many volcanoes that surround the city, including the towering El Misti.

Another theory which is commonly believed by the local population, is that the name ‘white city’ came about because it was built by spanish immigrants from the Basque Country who had pale skin and blonde hair. New Urban and archeological discoveries have shown that the frontage of houses were painted in different colours. Remaining examples can be found in the ‘Casa Tristan del Pozo’, the town centre. Ask for local help to identify Misti, Chachani and PichuPichu, the three volcanoes surrounding the city.

Arequipa embodies a rich mix of the indigenous and Spanish colonial cultures. With 468 years of history since its founding, examples of Spanish colonial architecture can be found throughout the center of the city and several surrounding districts.

UNESCO has declared it a Human Heritage site. Catholic churches are scattered throughout the center of the city. Some ancient houses have been refurbished by the local authorities and serve as living museums. An example of this are the so-called «Tambos» located at Puente Bolognesi street.