The Lord of Sipan 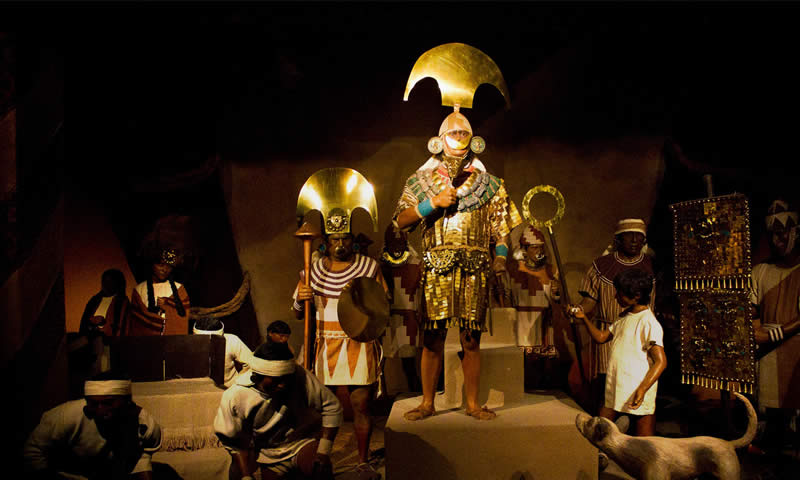 The Lord of Sipan (El Señor de Sipán), is the grave of an important leader of the pre-Inca civilization Moche, which was found by the Peruvian archeologist Walter Alva in 1987. According to several scientists, this grave is the most important archeological discovery of South America in the last 30 years. The grave of the Lord of Sipan is very special, since most of the graves were robbed, this one was found untouched.

The findings from the grave contained a great number of items made of gold, silver, copper and gems, all of those pieces are unique and masterpieces. This find of jewelry is also the major proof that the ancient peruvian people worked with metals. In total there were 400 jewels found such as elaborate masks, necklaces, earrings and much other beautiful jewelry. Also sea shells, rattles and knives were found, those were probably used for ceremonial purposes.

The Moche culture ruled the entire northern Peruvian coast, several centuries ago. When the Lord of Sipan, one of their main leaders died, they buried him. Like all the important leaders of this civilization, this warlord was buried with his head pointing south and his ears and nose were covered with jewelry of gold, silver and gems.

The grave survived intact for almost 1600 years, even tho there were constantly thieves in action in that area. The grave was found in 1987 by Walter Alva. This discovery was so special, that it was compared to the findings of Tutankhamen in Egypt.

After the discovery, the objects were exhibited in many countries of America, Asia and Europe. In 1989 , investigators of the Brüning Museum discovered two new graves in Huaca Rajada, “EL Sacerdote” (the Priest) and “EL Viejo Señor de Sipan” (the Old Lord of Sipan). Both graves contained a great number of items such as jewels made out of silver and gold, chest protectors, shells and peculiar pictures. Most of the pieces from Sipan were restored in Germany by the Bruening museum in Mainz between 1988 and 1993, they also hosted the event when the discoveries were returned to Peru.

Due to the request of Walter Alva all discoveries related to the ancient Moche civilization are exposed in the museum Royal Tombs of Sipan.

About the Lord of Sipán

According to scientists, who examined the skeleton, at the time of his death he was 1.63 meters tall and about 35-45 years old. Due to the amount and value of jewelry found in his grave it is assumed that he was one of the highest rank. Most of the ornaments were made of gold, silver, copper and semi-precious stones.

He was wearing two necklaces shaped in peanut form out of gold and silver, those are supposed to represent the earth.The peanuts symbolized that men came from the land, and that when they die, they return to the earth. Peanuts were used because they were an important food crop for the Moche. The necklaces had ten kernels on the right side made of gold, signifying masculinity and the sun god, and ten kernels on the left side made of silver, to represent femininity and the moon god.

Buried with the Lord of Sipán were six other people: three young women (possibly wives or concubines who had apparently died some time earlier), two males (probably warriors), and a child of about nine or ten years. The remains of a third male (possibly also a warrior) was found on the roof of the burial chamber sitting in a niche overlooking the chamber. There was also a dog which was probably the Lord of Sipan’s favorite pet. The warriors who were buried with the Lord of Sipán had amputated feet, as if to prevent them from leaving the grave. The women were dressed in ceremonial clothes. In addition to the people, archeologists found in the grave a total of 451 ceremonial items and offerings (burial goods), and the remains of several animals, including a dog and two llamas.

The Royal Tombs Museum of Sipán

The Royal Tombs of Sipán Museum, which is close to Lambayeque exposes most of the discoveries found at Huaca Rajada. The museum opened in 2002, Walter Alva who founded and supported the construction of the museum, is the director of the museum. In 2009 a smaller museum was opened in Huaca Rajada.

El Brujo and the Lady of Cao